St Budeaux Church was named after a bishop from Brittany. Budoc was the grandson of the king of Brest but had spent some of his childhood living in Cornwall with his mother. He eventually returned to Brittany, became a monk and was then made Bishop of Dol (now known as Dol-de-Bretagne). In about 480 A.D. he sent some of his monks in an open boat over to Britain. They sailed up the Tamar and landed by Ernesettle Creek where they built a wattle church. They were probably visited there a number of times by Bishop Budoc. He died in 500 A.D. and was buried in the Cathedral at Dol.

By 1066 A.D. the church had been rebuilt in stone and dedicated to St Budoc, but until 1482 it was regarded as part of St Andrew's parish. In that year it was made a parish in its own right, and a report commissioned in 1553 by King Edward IV shows it to have been a church with a tower and three bells.

However early on in the reign of Elizabeth I it was decided to rebuild the church on higher ground away from the river. The present church was completed in 1563. Some of the stone was probably taken from the old church and the granite font also probably came from the earlier building. Just six years after its completion, it became the church in which Sir Francis Drake married Mary Newman (1569).

Less than one hundred years later, in 1644, the church was badly damaged as a result of two battles in the Civil War which were centred on the church. It was another 11 years before the church was restored. The church was again restored in Victorian times in 1876, with more minor additional changes being made since then.

A booklet with a more detailed history can be found at the back of the present church.

Illustration from a nineteenth-century print - engraving by T.H. Williams and photo of the plaque on the Church entrance

The main reason for bells in our church at St Budeaux is to call the faithful to worship, as they have been doing almost continuously since 1563. They are also rung for National events, weddings and occasionally for Funerals.

However, to do this people need to learn how to do this over many months. Every Monday evening from 19:30 till 21:00 there is a practice session both for experienced ringers and new learners. The current band range in age from 9 to 59. If you would like to learn please contact the Bell Captain Peter Sparkes by email:- bells@st-budeaux-church.co.uk or phone:- 01752 362161. There is also an opportunity to learn to play handbells. Handbell practice is on the 3rd Friday evening of every month from 7:00 pm until 8:30 pm in the church building. For more details use one of the above contacts.

Of the six bells in the tower, it is almost certain that three are older than the church itself. Others were added in the seventeenth and nineteenth century. The older bells have been recast one or more times and in 2014 all the bells and the frame were re-furbished.

On the back wall of the tower is a stained glass window with two lights. On the left is the figure of St Budoc with one hand raised in blessing and holding a staff with cross in the other hand. By his feet there is sea and a ship in full sail. On the right is the standing bearded figure of St Andrew holding a fish in one hand. Behind is a St Andrew's cross (see the Brief History for an explanation of the significance of these figures).

At the front of the church in the centre, the stained glass window has six lights. In the upper panel from left to right are depictions of the Resurrection of Jesus, the Crucifixion and the Ascension. In the lower panel from left to right are representations of the Nativity, The Presentation at the Temple, and the Holy Family on the way to Jerusalem.

The stained glass window to the right at the front has three lights. The centre one shows the angel Gabriel seated above the Virgin Mary kneeling on a stool.

On the right-hand side of the church there is a further window depicting on the left, Moses with the 10 Commandments with St Peter beneath. In the centre Christ is shown with his right hand raised in blessing with St John kneeling beneath. Finally on the right of the window is Elijah holding a raven with St James kneeling. 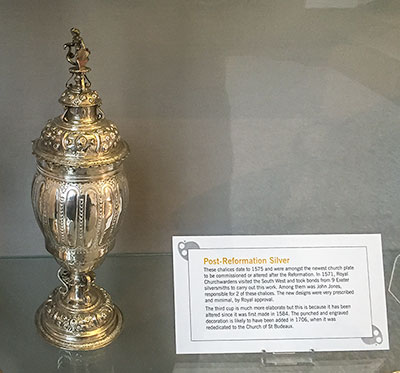 St Budeaux Parish Church has a silver chalice, or cup, dating from Elizabethan times, but being valuable it is kept in the Plymouth Museum where it is currently on display.


It is a good example of post-reformation silver. It is not known who made it, but it dates from 1584. Since then it has been altered with the punched and engraved decoration probably being added in 1706 when it was dedicated to the Church of St Budeaux.

A Grade II* listed building of this age requires a lot of regular maintenance as well as ensuring that, as far as possible, the building meets the modern requirements for a public building.


Work that is needed is supervised by the Church Wardens with the PCC, but there is no external source of funding for such work. Maintenance is only possible through the generous giving of the local congregation and occasionally additional donations from well-wishers.


Recent work has included a substantial re-wiring of the church and the installation of a new boiler.

Our graveyard is a peaceful place which many people appreciate. It is kept tidy by willing volunteers and also sometimes with help from the probation service - we are very grateful for all the hard work that is done.

There are no more spaces left for burials unless there is already a "family grave."

There are places for cremated remains to be interred – if the person was living in the parish.

Please note that we have a responsibility to keep the graveyard a special and traditional place. Apart from fresh cut flowers nothing may be put into the graveyard without permission from the vicar.